When it comes to premium tequila, El Tesoro stands apart 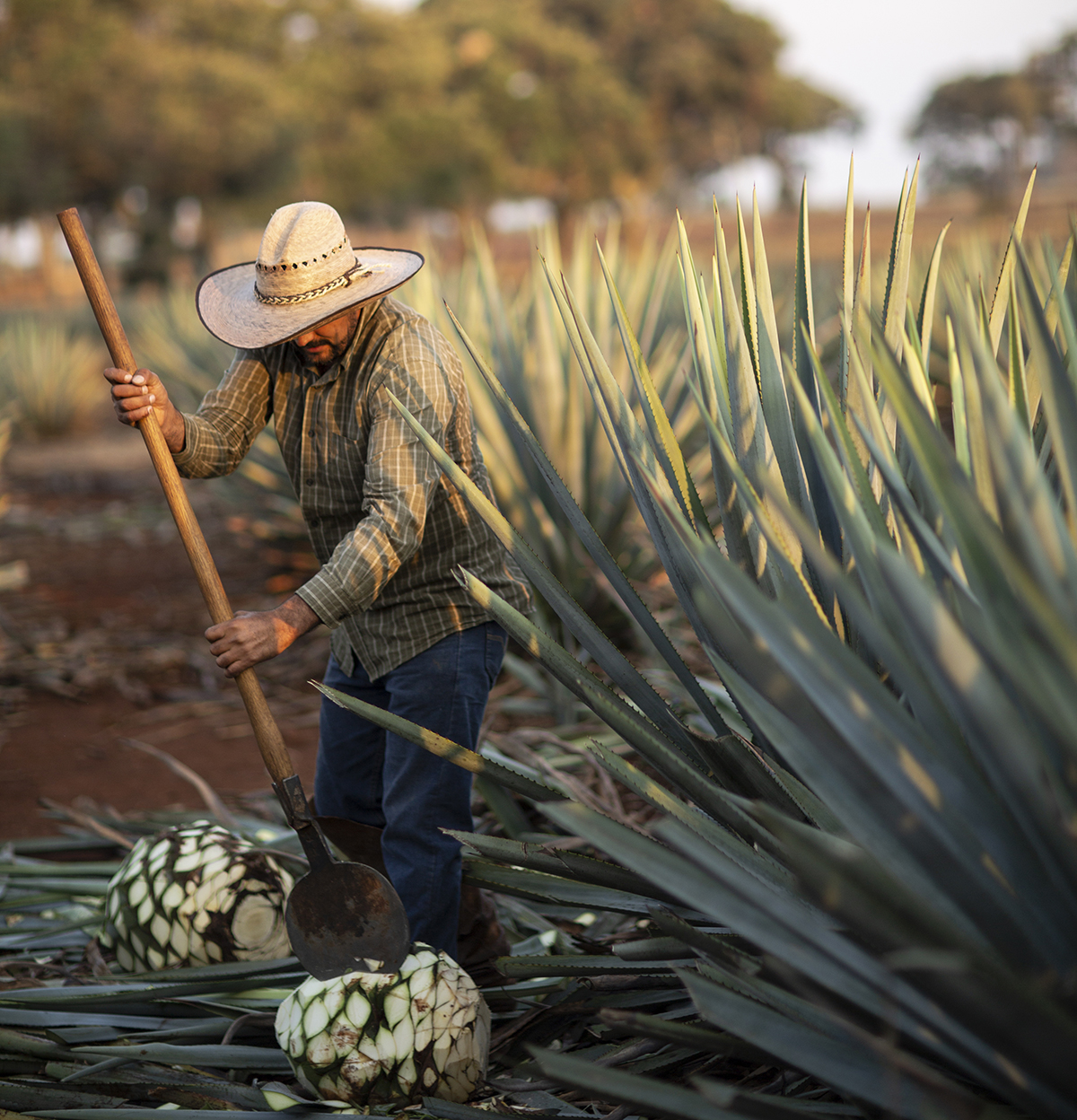 The resurgence of craft and premium tequila has been underway for some time now. As the segment continues to grow, it’s become difficult to distinguish the genuine craft brands from those capitalizing on a trend. Just because a product is produced in a premium process does not make it a best-in-class spirit. A deep respect for tradition, paired with a pioneering spirit, leads to truly memorable tequilas appropriate for any occasion—whether you are looking for the perfect margarita poolside, or a glass of Añejo served neat with a stack of pancakes (one pairing you will just have to try for yourself.) 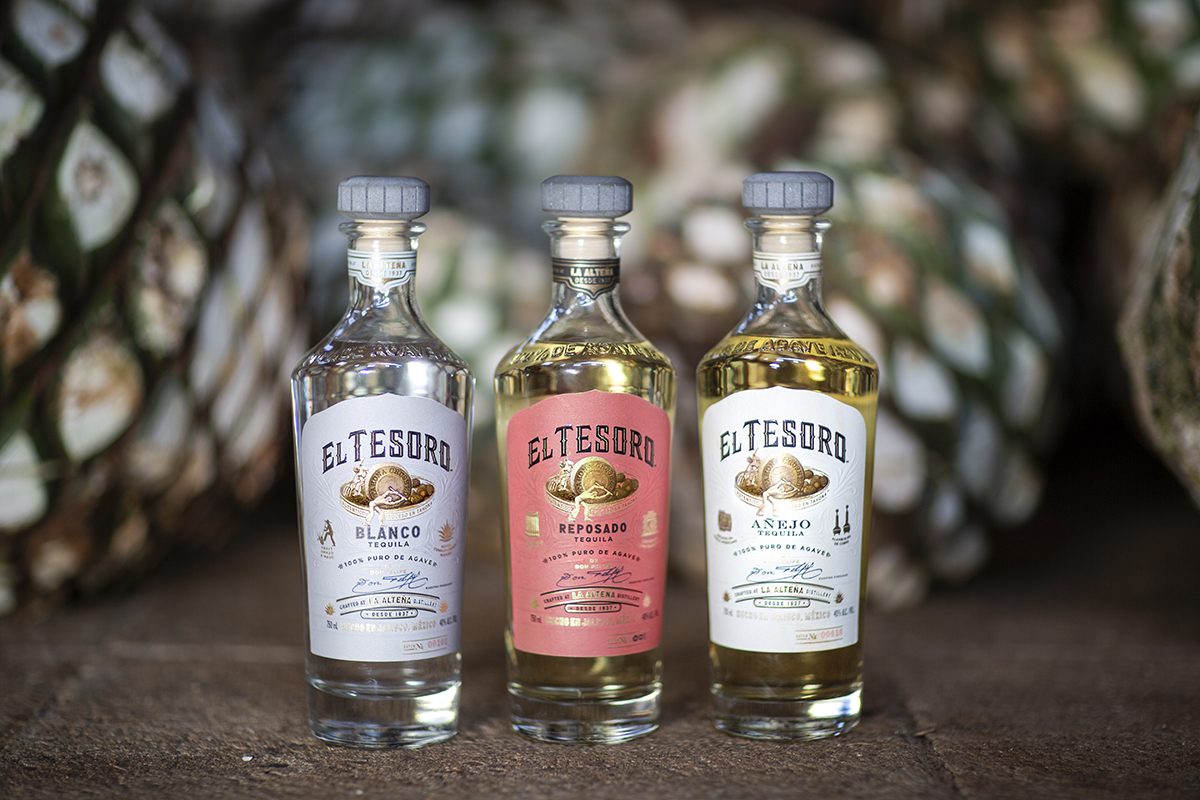 We wanted to focus this story on a brand that really stood out, one that is rooted not only in tradition, but also in preserving and challenging the industry as a whole. Our search led us to Jalisco, Mexico, more specifically Guadalajara, where we had to board a bus to our final destination. You see, while Jalisco as a whole is known for tequila, for the best tequila, you have to follow the road east until the ground turns blood red. The bus rolled on for about two hours, all the while traversing small highways and one-road towns. Countless small farms, all have the same goal: growing agave in the hopes of selling it to the local tequila industry. While many of these agave piñas looked perfectly fine for creating great tequila, we pressed on searching for the iron-rich red rocky soil, the secret to creating the sweetest piñas. Every ingredient, every step impacts the tequila’s characteristics – it all starts with the best raw material. 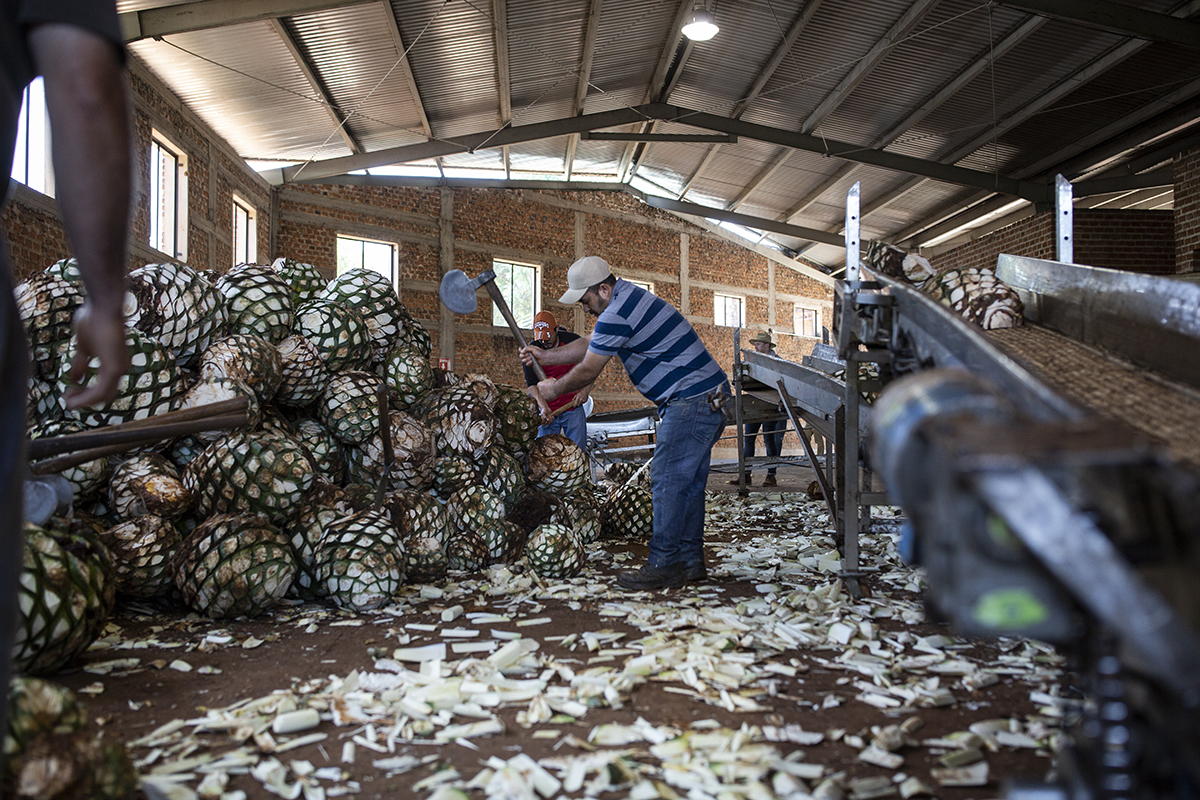 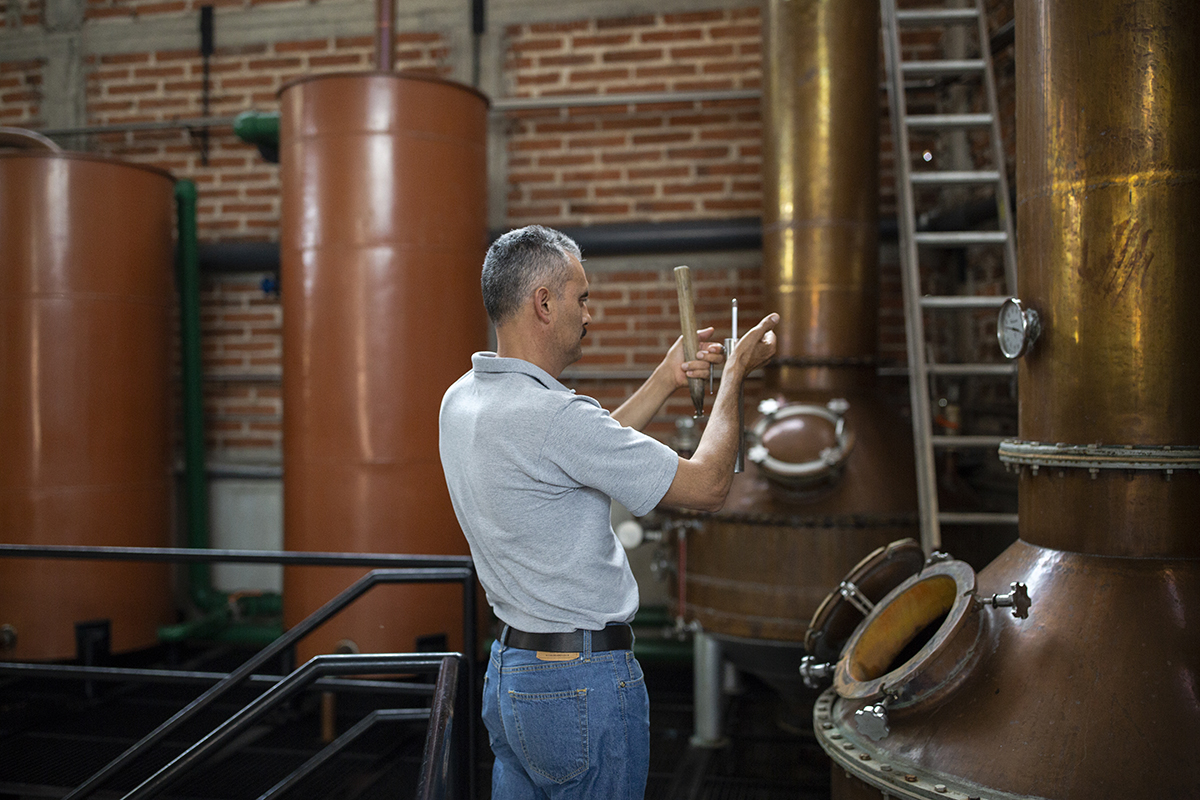 The bus begins to slow, and we find ourselves in Arandas, Jalisco. The dirt road is densely settled, and it feels like we are driving right through the middle of people’s backyards. The bus stops. We’ve made it to La Alteña distillery, an operation that’s now in its third generation and soon to be fourth, started by Don Felipe over 80 years ago in 1937 and run today by his grandson Carlos Camarena with the help of his two daughters. The distillery produces three brands of tequilas, but we’re here for just one: El Tesoro, one of the original premium tequilas and the pride of the Camarena family. 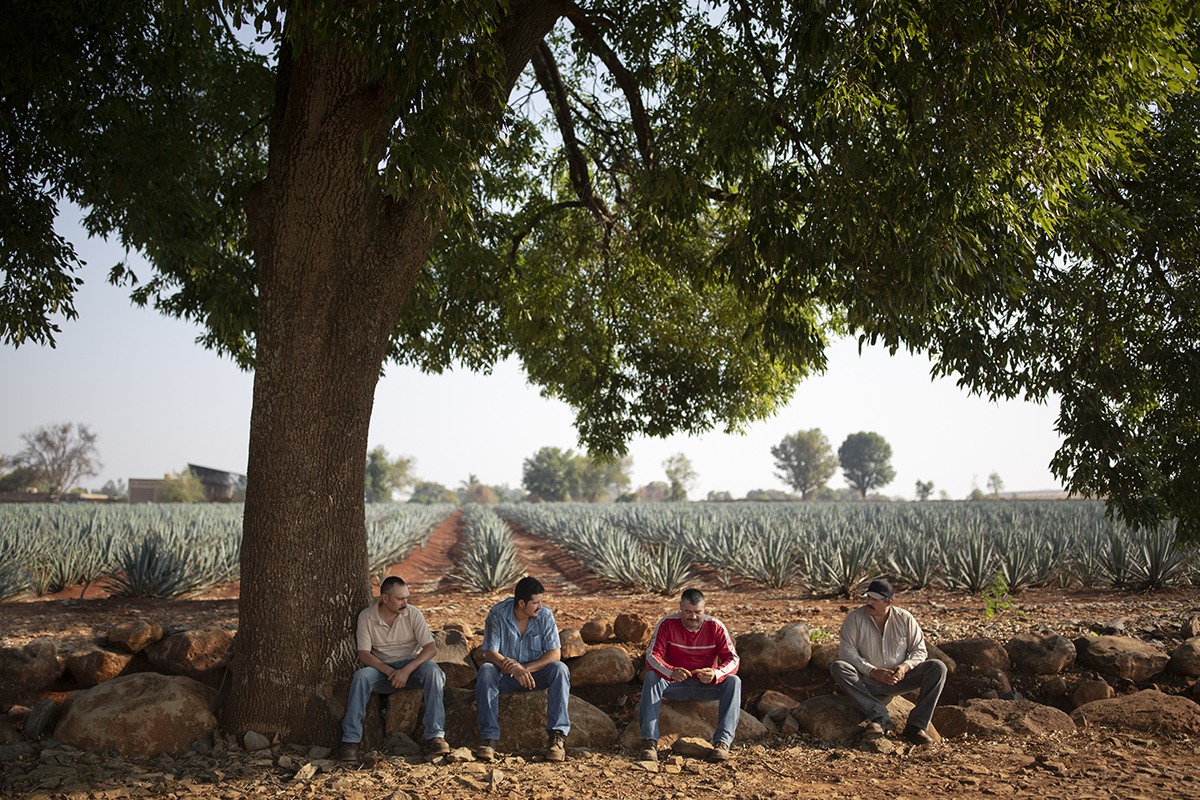 Our first stop upon arrival was the Horno ovens – large brick rooms with suspended wooden beam floors. Once the piñas have been halved and cored they are loaded into the massive steam ovens and left to slowly cook for two days, then left to cool for another full day. This slow cooking process reduces caramelization and brings out the fresh, sweet agave notes that play the hero in our finished tequila.

The raw spirit is used to create the typical Blanco, Respersato, and Añejo expressions, but it’s also used to create their “Extra Añejo” spirits like Paradiso aged for five years in cognac barrels, or their 80th anniversary aged an astonishing eight years in ex-bourbon barrels. While Extra Añejo expressions have become commonplace, the Camarena family has been experimenting with them for over 20 years. It’s this point of tension at the epicenter of tradition and innovation that keeps the El Tesoro expressions so balanced. Discuss aging and finishing with Carlos, and you will see his internal struggle between excitement for new tastes and restraint, not wanting to see the agave soul lost to other flavors. After all, Blanco was and still is the most celebrated way to drink tequila in Mexico. Nevertheless, it’s the Camarena family that fought for the legislative change allowing for a legal designation of “extra Añejo” back in 2006. While at the distillery, we had a chance to try the latest expression being released this October, El Tesoro Extra Añejo. The new mainstay expression is aged for 4-5 years in ex-bourbon barrels – it smells and taste of coffee, chocolate, and dried fruit, all amplified by the sweet undertones of agave. It plays with your palate, intriguingly different yet unmistakably familiar. 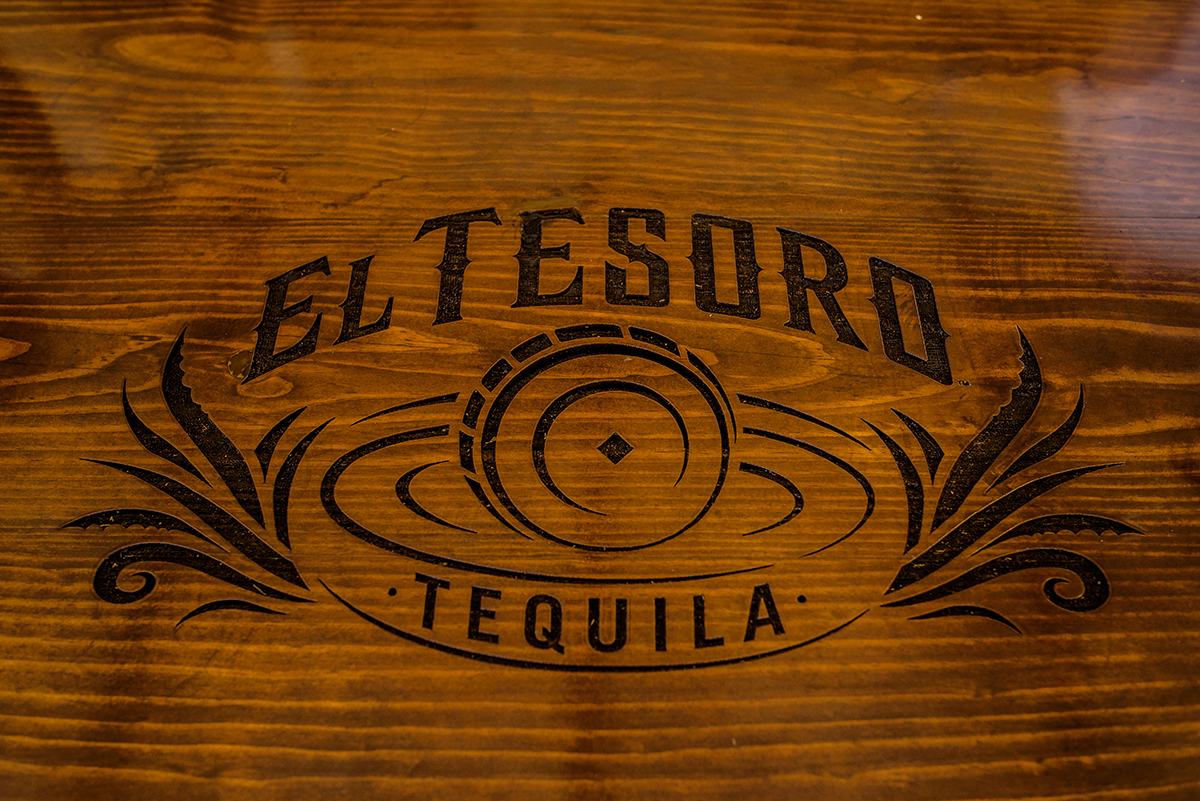 The push for industry change at La Alteña doesn’t end there. It goes all the way back to the beginning of the process. An agave plant must sacrifice its sugar in order to flower because of this piñas are cloned and harvested before they ever reach flowering maturity. While this has been the universally accepted method for 150 years, it leaves the whole industry vulnerable to an environmental factor with the potential to halt tequila production and the livelihood of an entire region. Carlos set off to solve the problem and began a program to grow agave seeds with the goal of creating genetic diversity in the agave crop.  The secret to pollinating agave happens under the cover of night, when the bats come out to feed on the Agave nectar. Some of the farmed agave plants are purposely allowed to flower in the hopes the bats will carry the wild pollen to bring them to seed. The plan was a success, but the work is just beginning. Of the 200,000 seeds gathered, only 6,000 made it to seedlings, just begins their long, seven-year journey to maturity. It’s a small start but a step in the right direction to ensure we have premium quality tequila for many generations to come. It’s this commitment to agave that makes the El Tesoro expressions so special.