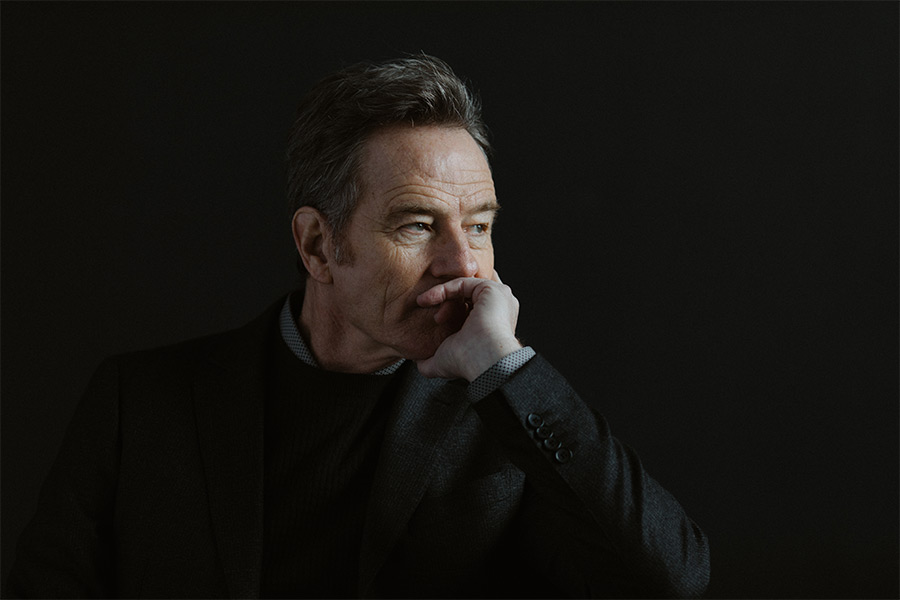 New York City. There’s no other place like it on Earth. She’s a difficult muse, incredibly generous then suddenly fickle—a place of wonder where dreams either come true or they don’t. It’s spectacular. It’s mesmerizing. It’s also freezing. Bryan Cranston walks onto our set at the Classic Club Car of Manhattan, the perfect backdrop for NOBLEMAN Magazine’s first-ever automotive awards. It’s an alluring, elegant garage filled with rare automobiles in the middle of New York City in the dead of winter. The temperature was probably something we should have considered. “Good thing it’s not a swimsuit shoot,” I tease Cranston.

Bryan is a gentleman, which is very refreshing. He’s also frozen. He’s a man full of character with an elegant sophistication about him that makes him seem wise beyond his years, like he was some sage or well-read traveler. I ask him my favorite question. “Complete this sentence: A gentleman always…” “…puts the seat down,” says Cranston. He’s the type of man who’s dapper enough to casually pull off a three-piece suit, rugged enough to grab a beer at a dive bar, and thoughtful enough to consider opposite-sex restroom etiquette. 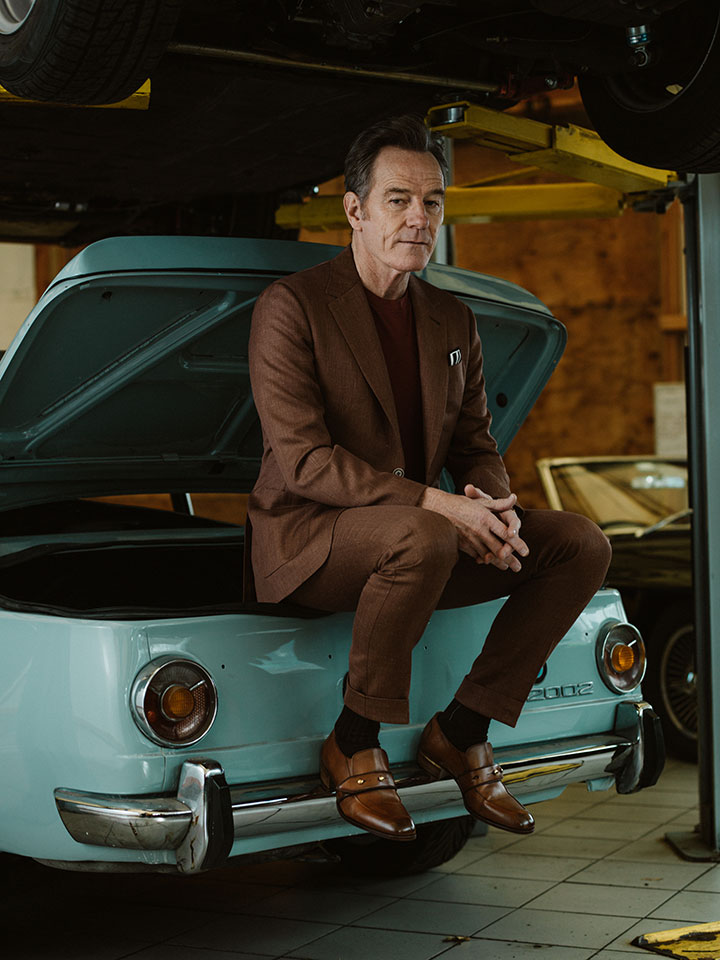 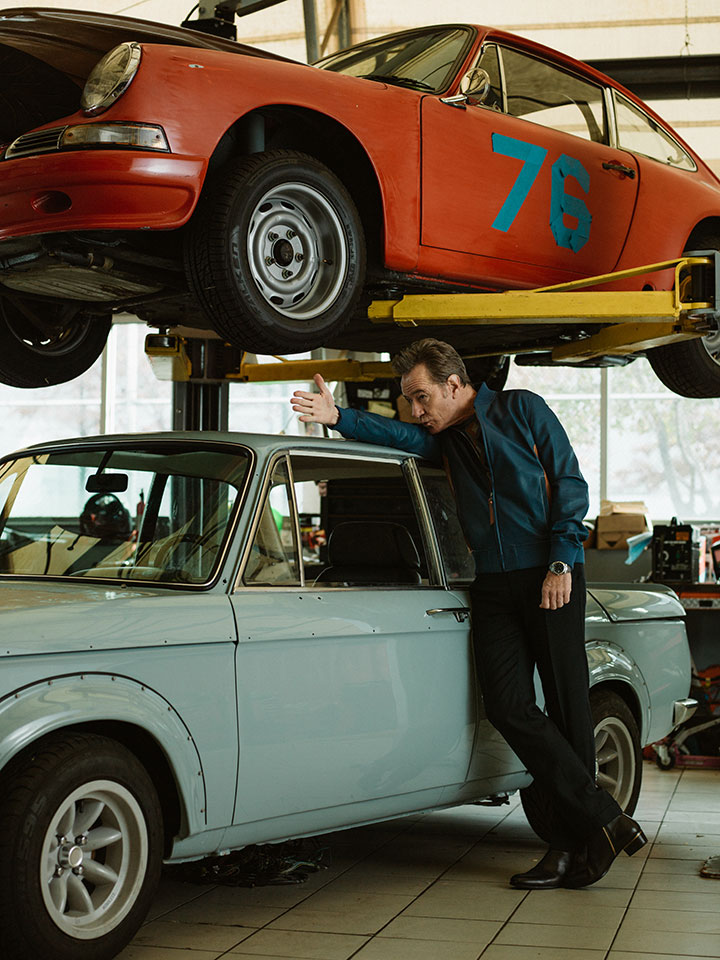 Very few can pull off what Cranston does. He’s a chameleon disguised as an actor. Whether on stage, television, or film, no matter the medium, Bryan’s performances are consistently dynamic and bold and never fail to impress. “For an actor, the most rewarding experience is performing on stage, because you get to tell a full story: a beginning, a middle, and an end every night.” I don’t think this guy gets enough credit and am prepared to defend my position on why he is Hollywood’s most versatile actor. “The biggest thing that I have to be prepared for between doing a film or stage work is the energy level. I tend to choose very complicated, troubled characters who go through a catharsis and often emotional breakdown.” 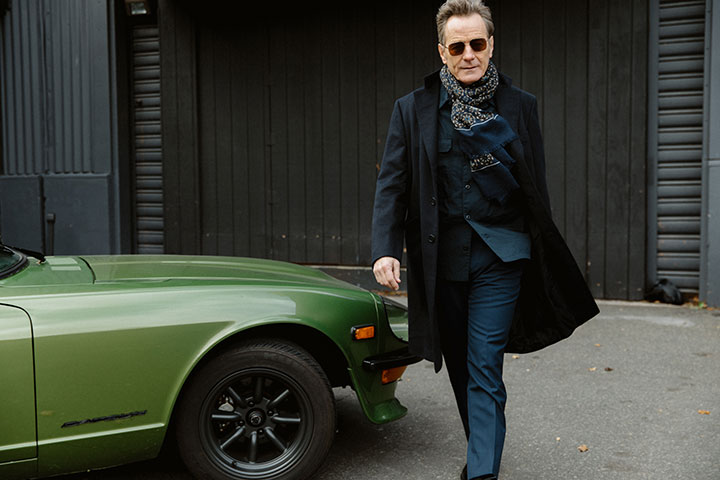 On Broadway, Cranston stars in NETWORK, a live interpretation of the iconic film by Paddy Chayefsky that won four Academy Awards in 1976. Howard Beale is a news anchor-man who isn’t pulling in the viewers. In his final broadcast, he unravels live on screen. However, when ratings soar, the network seizes on its newfound populist prophet, and Howard becomes the most significant thing on TV. NETWORK depicts a media landscape where opinion trumps fact. It’s hilarious and hair-raising, and Cranston’s performance is spellbinding. 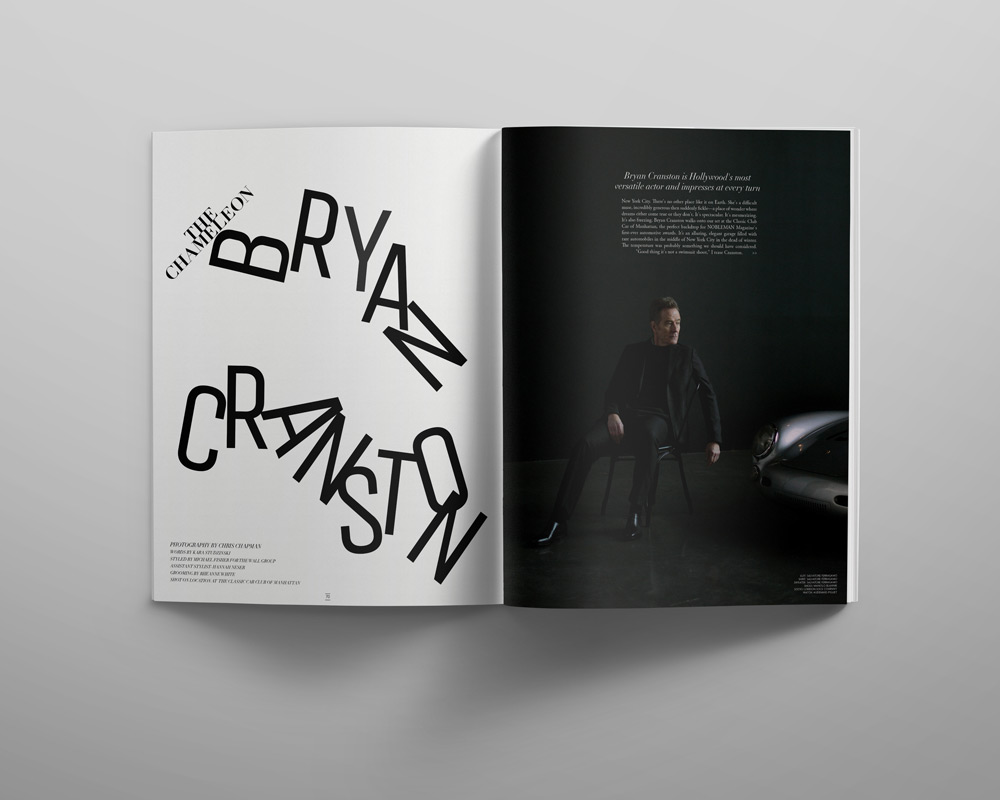 “We’re storytellers, so as long as you can be that storyteller, whether it’s TV, film, or stage, it almost doesn’t matter, because the story should dictate the medium. In this case, NETWORK was a movie first and now a play, and the way Paddy wrote was very theatrical. It was written over 40 years ago, and it resonates with today’s audience in this world of post-truth and fake news and being addicted to our devices. These are all things we talk about in NETWORK.”

While Cranston has played a wide variety of characters, perhaps the most challenging was the physical requirement involved in performing a person with quadriplegia in The Upside. In theaters January 11th, the film is inspired by the 2011 box-office-hit French film Les Intouchables. It’s an inspirational comedy based on the true-life friendship and lifelong bond forged between a wealthy man with quadriplegia and the ex-con he hires as his live-in caregiver. The film chronicles the unexpected friendship between the two, and, despite a rocky start, they quickly realize how much they can learn from each other’s experiences. An unlikely bond is formed, bridging differences and producing invaluable wisdom in the process, giving each man a renewed sense of passion for all of life’s possibilities. “This is a drama with comedic undertones, because you find some humor in tragic situations. I realize that’s the crux of the story: facing the challenges,” says Cranston. “There are dilemmas. Life is not easy.” 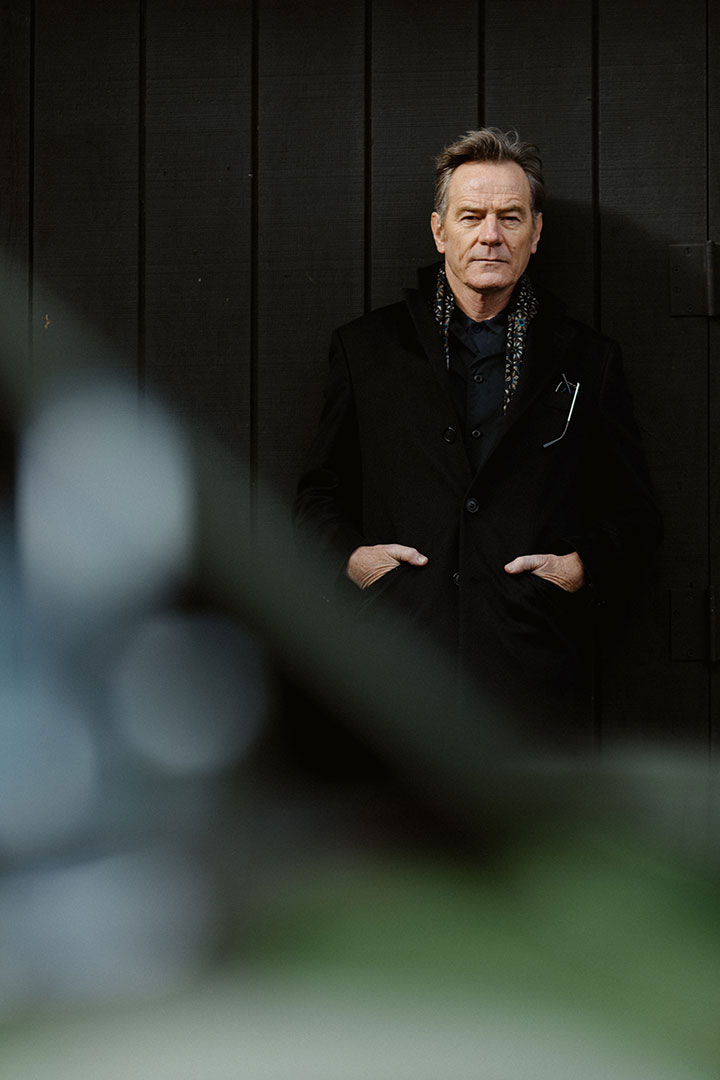 With curiosity, I asked him which character was the furthest away from who he was as a person. “Walter White, because he killed people. I haven’t done that yet, but there’s still time,” he joked. “What you do is you relate to your character and try and figure out why it’s justified what they’re doing. You don’t want to sit in judgment of your character. You want to stay inside of them and play it the way you feel that the person would play their own life.” 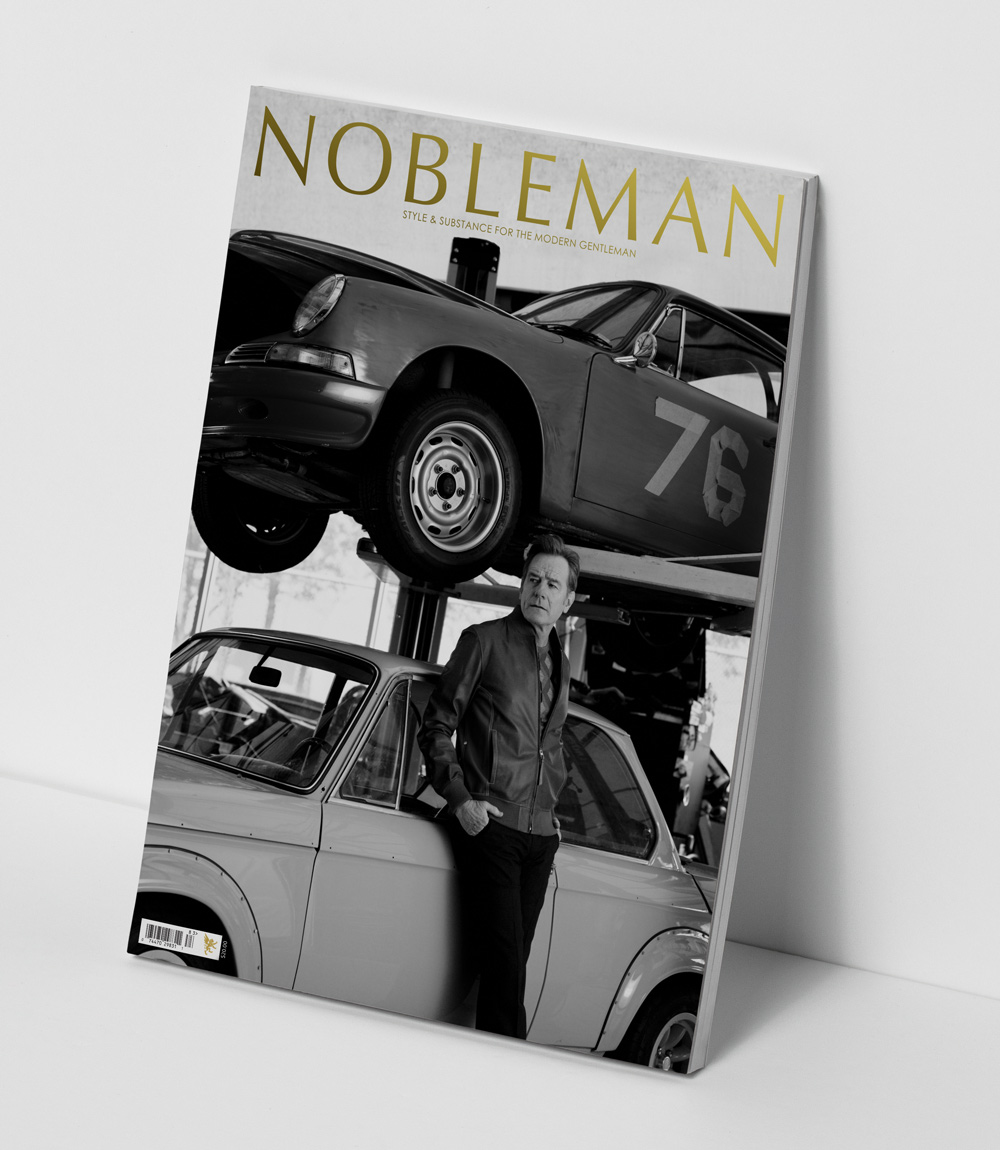 Luckily, in the repair shop next to the garage, we found a space heater, and while I thawed Bryan out, I thought about what we must ask ourselves as humans to give nobleness a place in the world. The solution, in many cases, is remaining steady. Continuing to learn, observe—a consistent effort in development. Bryan Cranston is the embodiment of this. “I think it’s incumbent to anyone who’s ever been fortunate in their lives to be able to use a platform of some notoriety to fight for causes around the world. Make the place better than when you found it. Continue to work toward the betterment of society.” Reflecting on the impact his career has had on him, he continues, “I haven’t had to do any other work besides acting in my adult life, and that’s a rarity. It never escapes me how fortunate I am to be able to say that, and so I go from project to project, and character to character, with alacrity and appreciation.”

For Bryan Cranston, storytelling is an ongoing pursuit. “Whether it’s a TV show, a film, a play, or the stories we tell ourselves, performance is a way of sharing narratives. Fiction, drama, fairy tales, fantasy, they’re the one experience that we all share as human beings, whether you’re 2 or 102. We all want to be told a story.” 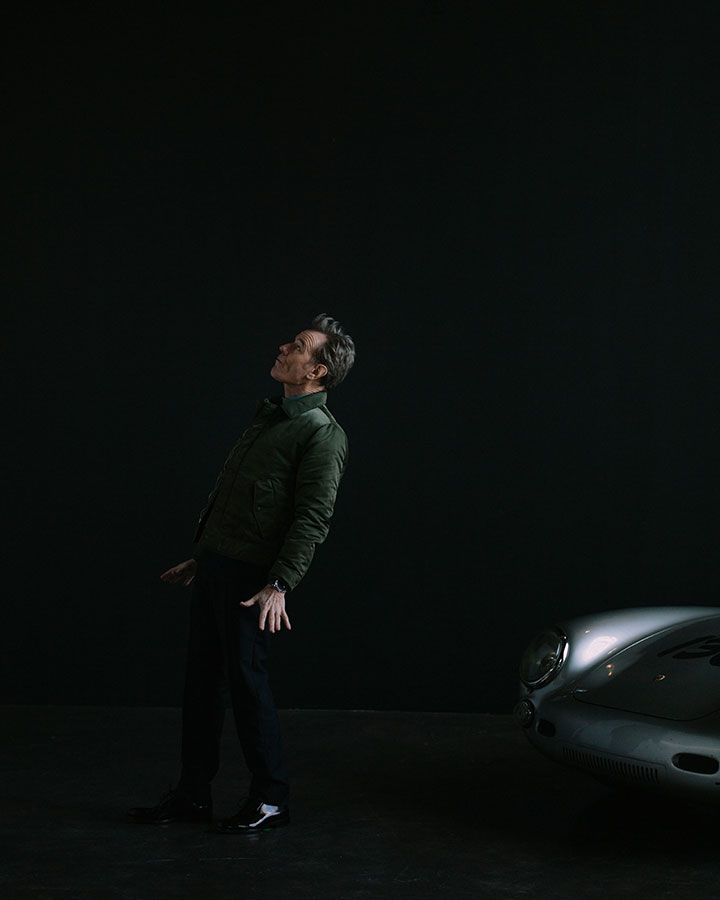